Written by Kissairis Munoz on October 8, 2011

Here at Greatist, we believe in taking a day off. Instead of our regular programming Saturdays, our writers get a chance to write about living the greatist lifestyle and, basically, whatever they want. This is one of those awesome articles. Enjoy!

This June, I sublet my apartment in Washington, D.C., sold all my belongings on Craigslist, and moved to South Korea to teach English for a year. After two years working full-time and pursuing a graduate degree in U.S. foreign policy, I was burnt out and ready for a change. I’ve always been passionate about travel, and the opportunity to explore a new continent while still getting paid was too good to pass up.

There were the usual “new-in-town” things to figure out, like mapping out the fastest walk to work, surviving on a modest (read: teacher’s) budget, and doing it all in a language I had no idea how to speak, read, or write. But one aspect I hadn’t given too much thought to was something I do several times a day: eat!

In the U.S., cooking from scratch and eating different cuisines is a breeze. Homemade pies, ethnic dishes (I’d kill for good falafel right now) and ingredients are easily accessible. But here in Korea, I’ve been forced to work with what I have. I live in a typical Korean studio apartment with a kitchen that’s smaller than some closets I’ve had. It’s equipped with a two-burner “stove” and, as is common in Asian countries, no oven— it’s not necessary in traditional Asian cooking.

Supermarkets aren’t the multi-dozen-aisle extravaganzas they are in the States, but they are headache-inducing just the same. My neighborhood grocery store has about five aisles packed with day-to-day necessities, a butcher, and produce, all while a man on a megaphone screams out the day’s specials to shoppers. People push and shove you out of the way as needed— in fact, when I asked a Korean friend what the polite way to say “Excuse me,” in a crowded situation was, she just gave me a confused look. “We don’t really have a way to express that,” she said. “You just move.”

All this means that some of my favorite dishes are a no-go these days. Goodbye, baked lasagnas and elaborate cakes. But, with a little bit of creativity, I can still whip up some culinary creations in the kitchen. Instead of roasting and stuffing a chicken, I learned that if you pick up a whole chicken at the grocery store, place it on the counter, and say, “Chop!” very authoritatively, the butcher will understand that you want the chicken cut up in pieces and will oblige, all for about $4. After seasoning that bird the same way you would a whole chicken and roasting it in a toaster oven in shifts, you can almost pretend that it’s Sunday dinner at home!

Fresh basil is rare here, and it’s an hour-long train ride to the Foreign, the Mecca of foreign goods in Seoul. But a quick Google search proved it would be easy enough to grow my own basil plant. Food shopping in a new city also means that, at most meals, I can experiment with new products. I’ve learned that Korean bacon is extra-delicious because they leave on the fatty parts, there are about 30 varieties of mushrooms available at the grocery store, and spinach can look deceivingly like quite a few Korean greens. (I’m still not quite sure what I ate that night, but it wasn’t a bad substitute!)

Of course, my adjustment to new eating habits hasn’t been perfect. I’ve been so cheese-deprived that I broke down recently and bought a box of Kraft singles for about $8— and yes, I loved every artificially cheesy bite. I’ve been known to spend $10 on a small, sad little stick of salami. But overall, getting out of my usual comfort zone has been an awesome experience. The changes I’ve made are easy enough to keep up even when I leave my new home. 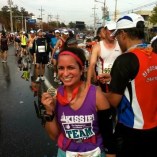 Written by Kissairis Munoz on October 8, 2011