So you want to host a Super Bowl party, but aren’t quite as into the actual game as some of your friends? That’s a-OK—in fact, you may be a better fit for hosting than the uber-sports fans. You’ll be willing to look up from the TV every now and then.

Hosting can get pricey if you’re not careful, especially for events that involve food, but being on a budget doesn’t mean you’re banned from parties. With a bit of planning (break down the event into categories: food, booze, and vibe), you’ll be well on your way to throwing a Super Bowl blowout with plenty to eat and drink—just maybe no snack stadium this year.

Super Bowl Sunday isn’t the day for a dinner party—but ordering wings for 20 people from your favorite sports bar could be just as expensive. Keep food snacky, finger-foody, and halfway-homemade to stretch your dollar as far as possible.Need some ideas?49 Healthy Dip Recipes That Put Guac to Shame The Best Store-Bought Chips and Crackers for Healthy Snacking 9 Nacho Recipes That Make Game Day a Tad Bit Healthier The Best Salsas You Can Buy at the Store7 Healthier Wing RecipesPizza! If the group is still hungry by the halftime show, tell everyone to throw in five bucks for a big ol’ pie.Pro tip: We’re big fans of putting out half of the food when guests first arrive. Then when halftime rolls around, you can surprise your guests with a new slew of dips, wings, and more dips to dive into. They’ll praise you as the best host ever.

Hosting doesn’t mean you have to spend all your money providing everyone’s liquor, but you’ll need something to get them tipsy. Before guests arrive, mix up a batch punch with a champagne base. No matter who wins, it’s a celebration of good food and good company, so the bubbly is a must. And don’t think that champagne will scare the crazy-beer-loving-loud-screaming sport fan away.In this Champagne batch cocktail, we share what else to have on hand so guests can make their drink according to whether they prefer rum, whisky, or just plain champs (pronounced “shamps”). Also, don’t forget to channel your inner college student and provide vodka, club soda, and limes, and maybe a bag of frozen cranberries instead of the juice to give it that adulting touch.It doesn’t sound like much, but you’ll change your tune after Dylan, James, and Alexa fill up their Solo cup a third time. (This is where that second bunch of apps come in handy. Drunk guests=major munchies.) And for the most important tip when it comes to booze: Tell everyone who plans on drinking to show up with a six pack or bottle of wine—everyone can try new brews, and no one spends a fortune. Thirsty for more tips? Here’s everything you need to know about stocking your bar and drinking on a budget.

OK, it’s the Super Bowl after all, so there are going to be some serious fans. But for others, this is just another Sunday—only instead of doing laundry and meal-prepping, they plan to eat a lot of cheese and day-drink wine with friends. They can remember that epic Beyonce concert from last year and think some sort of game opened for her? But the die-hards want the room silent during intense plays, only to let all hell break loose when their team scores a touchdown.No matter where you fall on this spectrum, we say embrace it. It’s a good game to watch, you should pay attention to the commercials since they’ll be the talk of your lunch break on Monday, and the halftime show is obviously sometimes the best part. If you have a mix of guys and girls who really care or couldn’t care less, be respectful of everyone. Think of your party like a bar, and make sure people can watch the action no matter what room they’re in… at different intensity levels.For the serious sports fans:Turn on your TV in the living room and put the volume on high-ish (not so loud that people can’t hear themselves chew your tasty apps). They won’t miss a beat (or a punt). For the commercial and halftime show fans:Set up a smaller gathering in your kitchen using a live-streaming iPad or laptop, so this group can still be in the know, but it’s not so in-your-face. Aren’t parties around a kitchen table the best parties anyway? Let the seats you do have fill up, and then everyone else can stand; it’s what they’d be doing in a crowded bar. For the ones who ate too many apps:Have a second iPad or laptop? Why not pop it in the bathroom for a full 360-viewing party? Kidding. Sort of.

Ultimately, as a host, treat the day with a stress-free attitude. If you’re the one who’s shushing people every six seconds, you probably shouldn’t host a Super Bowl party. On the flip side, if you’re rolling your eyes at every cheer, you shouldn’t be hosting either. Just remember, Super Bowl is a great excuse to chill with friends and have a drink or two (or five) on a Sunday night. You have to at least try to wake up for work tomorrow, so if you’re hungover AF, make these foods your new best friends. 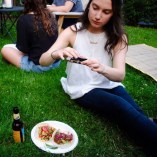