The Australian Workout That's About to Be Everywhere

When I picture Australia, I imagine Steve Irwin wrestling a crocodile at a pool party, while sun-kissed, sexy people dance around in tiny swimwear. The vibe is chill with an underlying sense of intensity: These people can definitely hold a tarantula without flinching—and look good doing it.

That’s not entirely the scene at Aussie-born F45 Training, but based on my experience, the workout embodies the same hybrid of intensity and chill Australia’s known for. Hailing from the country notorious for its ability to abbreviate practically any word, F45 stands for “Functional 45,” referring to the programming of the 45-minute workout. Functional movements mimic everyday life (think: squatting, running, lifting, twisting, pulling), and they’re used in all 31 of the class types offered at F45.

How Often Should You Really Do HIIT Workouts?

Like a lot of workouts on the market, each class uses stations to combine cardio, interval, and strength training. Also like other workouts, F45 claims to be “the most effective workout method for burning fat and building lean muscle.” None of them are necessarily wrong—studies agree that high-intensity interval training is the way to go if you’re looking to burn calories and gain muscle.

So if interval training in a group fitness setting is nothing new, what’s the big deal?

For starters, they’re growing at an insane pace. While the F45 founders call Australia home, they’ve popped up 350 franchises in the last two-and-a-half years and are now making waves in the U.S. of A, selling 30-50 franchises a month. And celebs like Hugh Jackman and Cardi B have already helped draw attention on social media. Eager to find out what all the hype is about, this Sheila spoke with founder Rob Deutsch—and tried the workout for herself.

The class before mine was still in session when I checked in on an iPad at the front of the Flatiron studio in New York City. F45 boasts innovative technology as the core of its experience, and as I scanned the studio, I saw that the digital check-in was just the beginning.

Flat screen TVs mounted around the room are responsible for everything from timing intervals to displaying the stats of clients wearing F45-specific heart rate monitors. Two screens showed instructions for rotating from station to station, while two others hosted one of the ripped Australians from my fantasy—I mean, vision—as he demoed each of the workouts.

I tried to get a sneak preview of the program to come, but there were a ton of moves happening at once. Like, a ton. The workout of the day involved 18 different stations that we were going to hit twice, and the moves at each station were to be performed for 35 seconds with 25 seconds to transition to the next.

At F45, both the workouts—which have menacing names like “Romans,” “Bears,” and “Firestorm”—and the playlists are programmed so members never get the same sweat twice. Deutsch explains that the programs are created from a database of more than 3,650 different exercises and an exercise encyclopedia that grows by about 1,000 exercises every year.

With two coaches per class (three, if you count the TV’s), there’s a lot of guidance in the room—and once class began, I needed every bit of it. The masochist in me signed up for the resistance-based “Renegade” class because the class description claimed my muscles would be “screaming after being superset over and over.” Now, I consider myself to be a very fit human, and I’m usually quick to catch on, but the quickly timed interval structure had me spazzing around the room like a squirrel caught in the middle of the road.

I found the tech to be impressive but overwhelming. Torn between looking at my new boyfriend on the screen for guidance and the station numbers marked on the floor, I scrambled while picking out my weights for the deadlift station, knowing I had only 25 seconds to get my sh*t together. I wasn’t quick enough on that station (or the next, or the next), so ended up losing a few precious reps.

“Our technology has enabled us to increase the innovation, which, in turn, maximizes the results,” Deutsch says, and while I’m sure this rings true with regard to the heart rate monitors—à la those at Orangetheory Fitness—I wasn’t wearing one. Not that I didn’t get a good sweat without a heart rate monitor, but I did feel like I was missing out by not having my name up on the TV screen with Kyle and Joan, who were crushing it at 80 percent of their maximum heart rate. (I later learned that you can link up a MyZone3 heart rate band to F45’s “LionHeart” program or you can buy one in-studio—prices vary from location to location, but you can snag one in NYC for a cool $60.)

Let me make it clear that my frustration wasn’t due to a lack of assistance. Thankfully, having multiple coaches in the room not only means there’s always someone around to form-check, but also—in true Aussie form—to shepherd people like me. With some gentle manhandling, I started to get the hang of splitting my focus among the TVs, the floor markings, the coaches, and then, boom—class was over.

Leaving the studio, I felt like I got a decent sweat, but my muscles weren’t screaming as much as my pride was. Seeking revenge, I signed up for “Bears” the following week. I chalk it up to a better work-to-rest ratio (55 seconds of work, 20 seconds of rest in this program) and a practice run under my belt, but I genuinely enjoyed the workout more and felt like it lived up to its 550-calorie burn claim. And the best part? My dignity was restored.

Aside from the tech and the programming, the studio itself has a sort of rough-and-tumble, no-frills feeling. There’s no juice bar or dim lighting, just a room filled with equipment like rowing machines, sandbags, and bosu balls, and people of all shapes and sizes who seem happy to be there.

In my class, it was clear that people knew each other—the high-fives were flying, and one really enthusiastic guy yelled “LET’S GO!!!” a few times. I was obviously the new kid in class, but we were partnered up for the circuit by the instructor, which eliminated that awkward last-picked feeling.

When I asked my partner if she came to class often, she told me she was in the middle of F45’s 8 Week Challenge. And she wasn’t alone—a large, weekly calendar near the locker rooms was piled with the kind of stickers you’d give a first-grader for finishing a chapter book.

The 8 Week Challenge also includes an app to connect members outside of the studio. “It’s a complete health ecosystem,” Deutsch says. “It includes knowledge from industry experts, a nutrition program, shopping lists, daily tracking, and support from fellow challenge members across the globe.”

Keep In Mind: It’s a Franchise

I can speak for my experience at F45, but I can’t necessarily speak for yours. As franchises are individually owned, each one will inevitably have its own unique management style and pricing. It’s no surprise that New Yorkers are looking at a $36 per class price-tag compared to the $27 classes in Buckhead, Georgia. And newbies aren’t expected to buy in blindly: I got a buy-one-get-two-free deal in NYC, and this Florida studio offers a week trial for free. Whatever the differences are, Deutsch believes that as a brand they’re filling a gap in the fitness scene left by traditional gyms.

“It’s the space between where people pay a small membership fee to work out on their own and high-cost personal training sessions,” he says. This isn’t a new concept, either, but another option for group fitness lovers never hurts.

So, should you try it? If you’re looking for a fitness community and a way to log your progress, I say “sure, go for it.” I would, however, seriously advise you to look at the schedule and choose a day when the intervals are longer to avoid my squirrel-in-the-road scenario. Or call the studio and ask for a recommendation for your first class. As your fit friend you’ve never met, trust me: Do as I say, not as I do.

By the looks of it, you might have a chance to try F45 Training in your neck of the woods sooner than later. “We will have 700 franchises sold in the U.S., plus 30 colleges with a studio on campus by the end of 2018, which is a very powerful start to our brand growth abroad,” Deutsch says. Um, deffo, mate. 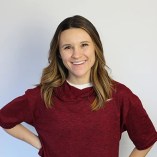