Why Kanye’s Struggle With Mental Health Hits Home for Me

Last month, as I lay under my covers with no desire to leave the safety of the imaginary bubble I had built around my bed, my husband stood right on the edge of my space. He has learned to brace himself whenever November approaches; it happens like clockwork almost every year. Like Kanye, I lost a parent in that month, and over a decade later, it still hasn’t gotten any easier to deal with the anniversary of their death.

When I read that Kim might leave Kanye after his meltdown, the story was sadly familiar.

After a few years together, my husband is conscious of what I’m dealing with—I have been diagnosed with severe anxiety and depression—and I know that he is there for me. But I can’t expect the days when I border on catatonic not to affect our relationship on a deeper level.

When I read that Kim might leave Kanye after his meltdown, the story was sadly familiar. I understood; it’s hard having a partner who has mental health issues, and the day to day can truly be a compromise for both parties. As the emotionally unstable half of my relationship, I empathize with Kanye, who was reportedly diagnosed with paranoia and depression after a brief hospitalization related to his mental health collapse. It’s not easy being the “Kanye” in a relationship, but I know from watching my husband that it can be even more difficult to play the role of support system.

It’s not only the idea of potentially being abandoned that scares me, it’s also the feeling that you might lose the one you love because you are somehow defective. A lot of effort goes into managing my mental health for the sake of my relationship and friendships. There is a lot of guilt and underlying shame when your suffering feels like it causes the people closest to you to suffer too.

This year, I made the decision to seek out a psychiatrist. The search was not an easy task, especially since I exist at the intersection of being black and mentally ill. Our culture is quick to label black people as “overly emotional” or “aggressive.” A stigma still exists for people—especially black people—who live with psychological disorders, which is a reason so many people stay in the closet about their mental health struggles, and don’t seek the treatment they need. This stigma is reiterated in headlines; despite seeing Kanye’s behavior continually deteriorate, his events have been categorized as “emotional outbursts” and “tantrums.” And despite the fact that several of Kanye’s friends have suggested that he genuinely needs psychiatric help, many still accuse him of “faking it” for attention.

Neither Kanye nor I is exempt from the expectation of strength and resilience that prevents black people, and black women especially, from embracing our full range of emotions and seeking professional help. When someone like Kanye is described as arrogant or angry, rather than in need of care, this reminds us of a cultural perception that people with mental health issues aren’t worthy of healing.

In my journey, it has been a struggle to find a culturally competent therapist who could authentically understand my experiences enough to administer acceptable care. And the entire search required such a tremendous amount of effort I almost gave up several times.

The first therapist I found was an old white guy. I sat in his office and described my spike in social anxiety that had begun as a direct result of the never-ending microaggressions I experienced on a daily basis after moving to the extremely white city of Portland, Oregon. His remedy was to read a book by the Nigerian author Chimamanda Ngozi Adichie and to immediately forgive and educate everyone who was being racist because they “didn’t mean it.”

Another therapist reassured me that she could understand what I was going through because she had coincidentally watched Selma the night before. She made this statement right before she fetishized my unborn child; when she learned my husband is white, she noted how cute my kid would be. Both of these inappropriate statements took place in one session, but she managed to squeeze one more microaggression into a 60-minute time slot by telling me I looked “strong and muscular” (which is often synonymous with a lack of femininity in black women) when I expressed concerns about a negative body image.

I eventually did find a therapist who has been super lit, and now I don’t feel forced to code switch or explain certain cultural understandings for context. Recovering from trauma is an ongoing process, and I’m lucky to have a patient and understanding partner who is there for me throughout. And while I continue to get better, so does our relationship.

Unlike someone who has a visibly apparent physical condition, there’s really no way to know the mental state of your spouse or partner without their transparency. But that can be hard if they are riddled with the embarrassment of being incapable of getting over what they may feel is a cognitive abnormality. There are days when it seems more useful to pretend everything is OK than to admit that you have no explanation as to why exactly you have no will to get out of bed. And I know that it’s hard for my husband that he’s always along for the ride… whether or not he wants to be at that exact moment.

So I guess it makes sense that I’m taking some comfort in the tabloids right now. Despite Page Six reporting that Kim and Kanye are living separately following his hospital release, according to E!, the couple is stronger than ever, and just like me, Kanye seems to be taking it day by day to get back to his version of “normal.” 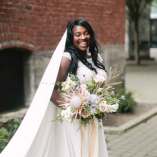