Six-Pack Abs in Six Weeks #Absperiment: It Takes a Village

This is Week 1 of 6 in Derek Flanzraich’s #absperiment series. Catch up on Week 0 (why he’s doing this to begin with) or read ahead for Week 2 (how it’s about the little things), Week 3 (how much traveling sucks for this), Week 4 (early conclusions), Week 5(the sacrifices), and Week 6 (it’s over).

It’s been just one week since I began my six-pack abs in six weeks #absperiment, and boy are my arms tired. Seriously, they’re tired from all the working out. Specifically my triceps.

Day-by-day, meal-by-meal, workout-by-workout, here’s what the past week consisted of:

Day 1 (Monday, June 11): Hot yoga (I love the effect this Monday evening class has on the rest of my week, so I’m not giving it up!) and Low Carb, Lower Calorie Day

Ultimately, week one honestly wasn’t that tough. I was pretty dialed in and excited about the beginning of this, and I think that focus helped. The hardest part was probably remembering to take pictures every morning (stay tuned for visuals at the end of my project!). For those who’ve been asking for “before” photos — a surprising number, actually — I’ve purposefully decided not to show them. I don’t want this to be a typical “six-pack abs in six weeks” story. Though I may be following an approach others would take, my journey has a different purpose: I’m doing this for you so you don’t have to (or, at least, that’s what I’m expecting to conclude by the end of these six weeks). So you don’t have to ignore a social life, sacrifice the indulgences you love, and be miserable if you don’t want to be. I don’t think you need six-pack abs to be healthy. And I don’t think working to get six-pack abs will necessarily make you better or happier, either. But we’ll see, won’t we? That’s what I’m looking to figure out and report back on. Oh — and if, despite this disclaimer, you choose to seek six-pack abs yourself, remember: I’d recommend not copying this plan exactly. Even though I’m taking this as reasonably and safely as possible, it’s still a relatively extreme regime, even for someone who’s already committed to health and fitness and has been for the past eight years.

One of the Greatist Experts advising this #absperiment suggested it’s “sort of like Fast Food nation, but backwards,” and I think that’s pretty right on (at least “sort of”). I’ve never really wanted or needed six-pack abs, and I don’t expect to keep them for very long afterwards.

So far, this journey has been primarily about sacrifices. I haven’t been that hungry. I haven’t been that tired. What has made me mad is feeling uncomfortable watching a basketball game in a sports bar because I don’t know what the heck I’d order to drink. It was frustrating to attend a fantastic food and wine tasting, but only take one tiny sip of each wine. I felt terribly sick after my cheat meal of a big burger and fries. Thursday night, I had a vivid dream about an ice cream buffet where I quickly downed an entire serving pan when no one was watching! I dreamt that. Not kidding.

Weird dreams aside, my big takeaway this week was that getting six-pack abs isn’t just a personal struggle — it takes (and affects) a village. Before embarking on this journey, I hoped I would receive some support from the community, but I’ve been blown away by the warm reception and kindness of so many. My friends and family have been especially understanding. (At least, so far — it’s unclear how my Russian grandma will react when I tell her I can’t eat any of the delicious dishes she cooks for me.) My girlfriend has been nothing short of incredible, agreeing to try this “peeled zucchini” instead of pasta recipe without putting up too much of a fight. (We’ll see how she feels during week four of her drinking red wine without me.) And John Romaniello, my buddy and all-around all-star, has been an awesome accountability partner, swapping emails to keep each other in the loop as we both work to accomplish similar goals.

And thanks to Greatist, I’ve been extraordinarily lucky enough to receive guidance from some of the most incredible experts in the health and wellness industry. Trainers and fitness competitors Jen Cassetty and Robynn Europe offered invaluable tips (“train your abs the way you train other parts of your body that you want to grow. You wouldn’t do six sets of 40 bicep curls and expect to grow huge arms”), and dieticians Lindsey Joe and Esther Blum shared best practices, too (include an indulgence meal — but not a crazy one — once per week: “You can have your cake and eat it too”).

I also turned to Peak Performance’s Joe Dowdell, who talked me through his take on the plan, as well as Precision Nutrition’s Dr. John Berardi and Jay Bonn, who counseled me on the importance of “using the power of less” (aka “minimum effective dose“) to get in the best shape possible with limited time. Finally, I turned to Matt McGorry, who I’ve started to call my sherpa (he, for some reason, was unexpectedly OK with this). He has been my go-to guide for this journey, getting me around the riverbend (he was also OK with this Pocahontas reference). I’ve been working out with him for some time now and he agreed to manage the process, helping me take it up another notch. He’s the perfect fit, with both experience as a competitive powerlifter, getting extraordinarily lean, and as a trainer just making relatable choices. Plus he’s hilarious, and may or may not sing and dance to classic 80’s hip-hop with me on the gym floor during rest periods. I know my weakness — prioritizing work above all else — and without him I wouldn’t be as committed in the gym or, more importantly, as focused on proper form to avoid injury.

Last, but certainly not least, I was struck by how our awesome community responded. Maybe it’s the whole “six-pack” abs thing and it just works, but I’d like to think our readers get that this is different. And that that’s why there are nearly 100 supportive comments and questions on last week’s introductory post, responses to my exercise logging on Fitocracy and nutrition tracking at MyFitnessPal, plus encouragements via Facebook and Twitter. So thanks everyone. A huge, huge thanks. Here’s to week two! 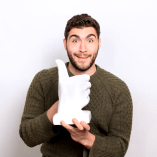